The Mount Meru is the centrepiece of Arusha National Park and its fertile slopes rise above the surrounding savanna and support a forest that hosts diverse wildlife, including nearly 400 species of birds, and also monkeys and leopards. Trekkers have the opportunity to see a lot of wildlife as they approach and climb the mountain. The ascent is quite steep in places and the route to the summit passes over a number of streams, moving through grasslands, tropical rainforest, alpine meadows, moorlands and desert uplands to snow and ice.

Mount Meru is located in the heart of Arusha National Park and it is 50 miles west of Mt. Kilimanjaro. Mt. Meru is a massive volcano reaching 14,980 feet (4,565 meters). This trek serves as an ideal warm up for Mt. Kilimanjaro due to its altitude acclimatization and hiking distances. This trek is also geared towards hikers that prefer less crowds and a challenging ascent.

Some believe that Mt. Meru is the mountain where Noah’s Ark came to rest after the Biblical flood ended!

Because Meru is located in Arusha National Park, hikers must climb with an armed ranger due to the wide range of wildlife living on the mountain. On the lower slopes of the mountain, hikers are more likely to see elephants, giraffes, and buffalo! As hikers continue their ascents, the trail follows the north rim of the volcano’s crater along a dramatic ridge line. Throughout the climb, hikers sleep in designated huts along the trail. Hikers reach the summit as the sun is rising and they will have spectacular views of Mt. Kilimanjaro and of the Mt. Meru Crater. 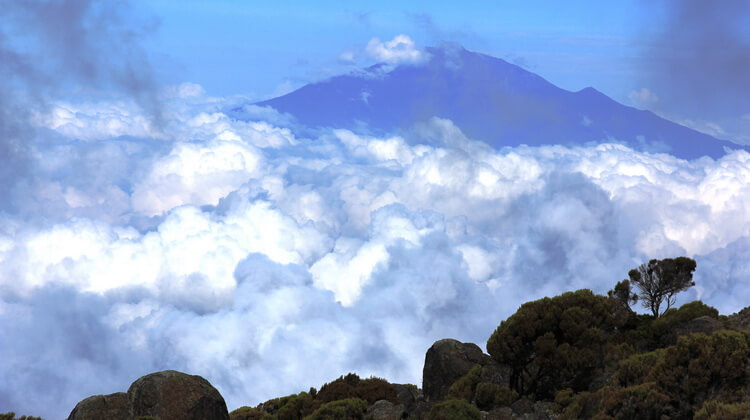